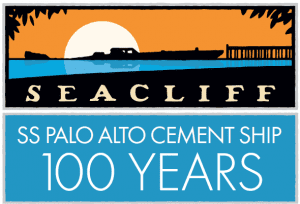 This year, the beloved “Cement Ship” at Seacliff State Beach marks 100 years in the water — and 90 years off the coast of Aptos. Three special events were planned to commemorate the centennial of the S.S. Palo Alto.

The S.S. Palo Alto, one of a few cement ships built during World War I, has been a popular attraction for visitors since it was put in place in 1930. The plan was to turn the ship and the pier into an amusement and fishing ship. The Cal-Nevada Company quickly constructed a dance floor on the main deck, a cafe in the superstructure of the ship, a 4-foot-deep heated swimming pool and a series of carnival type concessions on the aft deck. Richard Cliff Porter was one of the men involved in the enterprise. Read his grandson’s recollections of Porter here.

Unfortunately, the Cal-Nevada Company went bankrupt after only two seasons. The ship was then stripped — leaving the pier and the ship to be used only for fishing and as a nature preserve.

The deteriorating ship was closed to foot traffic in 2000. Winter storms in 2016 and 2017 turned the stern of the ship over onto its side and damaged the far end of the pier.

Still beloved, the S.S. Palo Alto today is a haven for wildlife above and below the water line, and has begun a new life as a thriving habitat.